It seems like my life revolved around Mass. Ave. last Saturday. Between the haircut, the Saturday meeting of the Local Government Luncheon Seminar, the cleaners, and the rest of the errands, I found myself heading up and down the avenue with amazing frequency.

If my life revolves around the avenue, and it’s a beautiful day, why am I driving myself up and down the avenue instead of riding a bus that is scheduled to run at no more than a ten minute interval?

Wes Beal and I were heading east along Mass. Ave. near the Alewife Brook Parkway when we spotted two 77 buses heading toward Harvard Square at 12:30 p.m. “No excuses for bus bunching on a Saturday,” I remarked.

Why is this a big deal? Quite simple. If the 77 is running on schedule, a bus will come along every ten minutes. If you ride the bus often, the average wait will be five minutes and the wait will be no more than ten minutes. When they bunch, chances are the first bus is now running 10 minutes late, so the average and maximum wait doubles, and more.

Late buses mean more people waiting at bus stops, more time required to board and disembark from buses, and the bus gets later and later. Meanwhile, the next bus on the schedule zips past empty bus stops and catches the previous bus. When a 10 minute interval becomes a 0 minute interval, it creates 20+ minute gaps as well.

The research literature talks of congestion and very long bus routes as major causes of bunching. The 77 does run on very congested streets during morning and evening rush hours, but this is a Saturday on a 5.25 mile route. It’s a clear and dry Saturday.

Too much ain’t enough
But that’s not all. During the rest of the day, my trips up and down the avenue led to encounters with more bunches of buses. Bunches of people waiting at bus stops. Here’s the other three instances from Saturday, October 25. 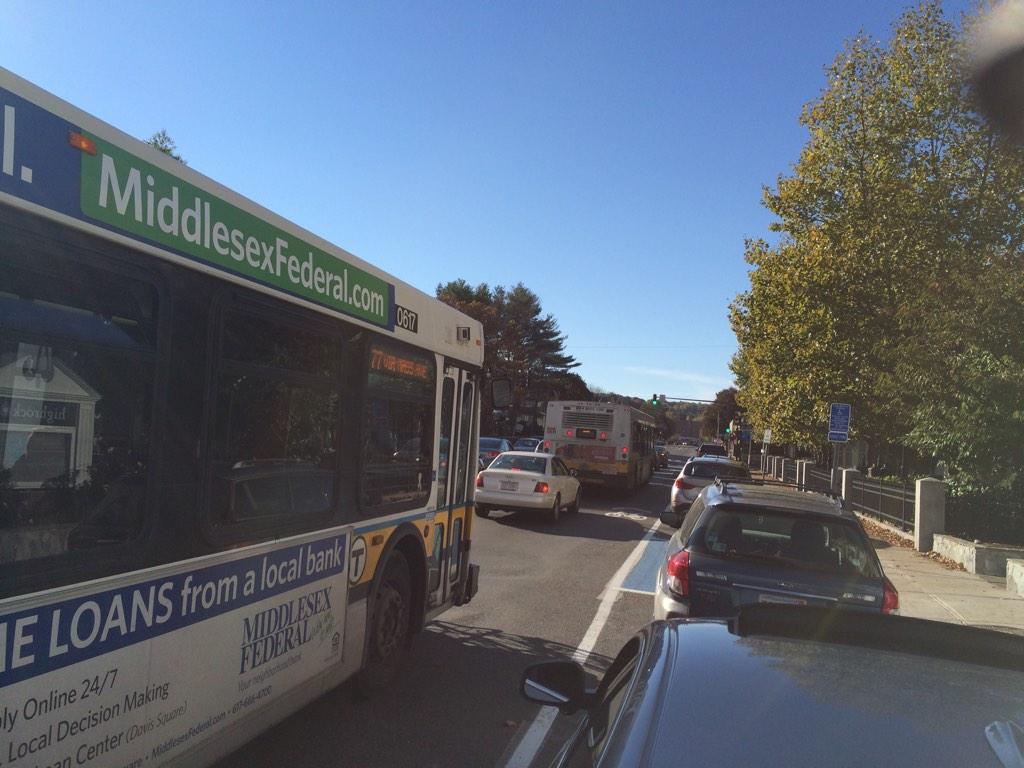 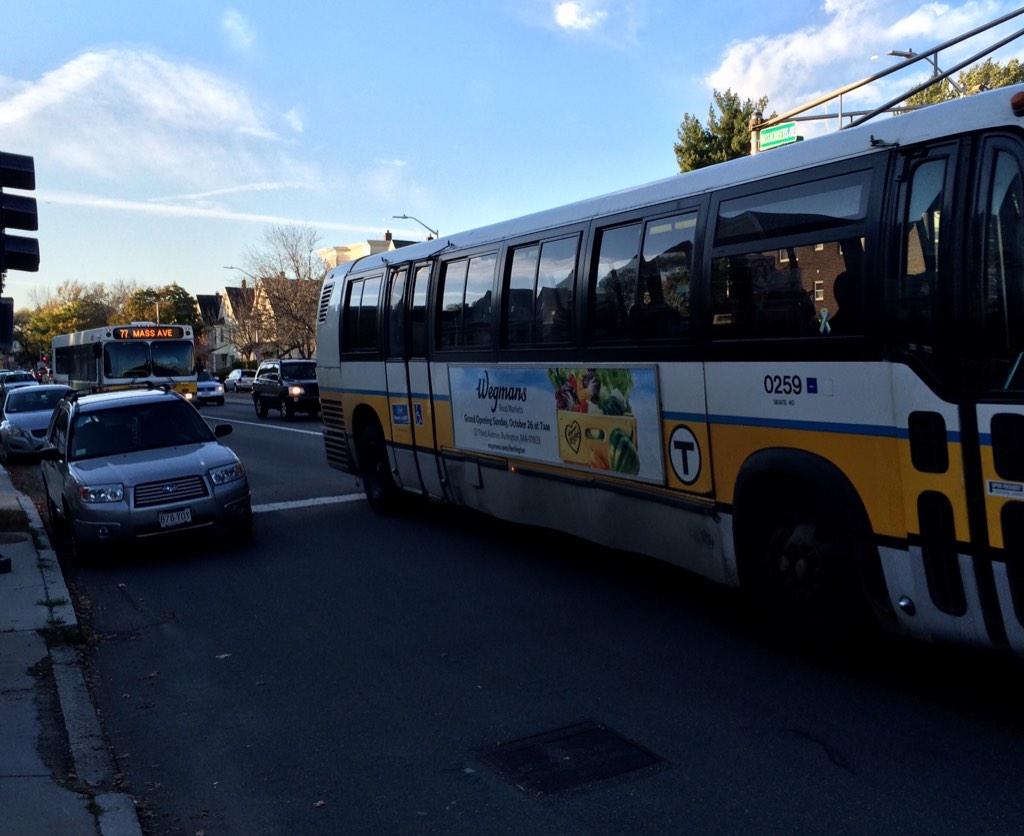 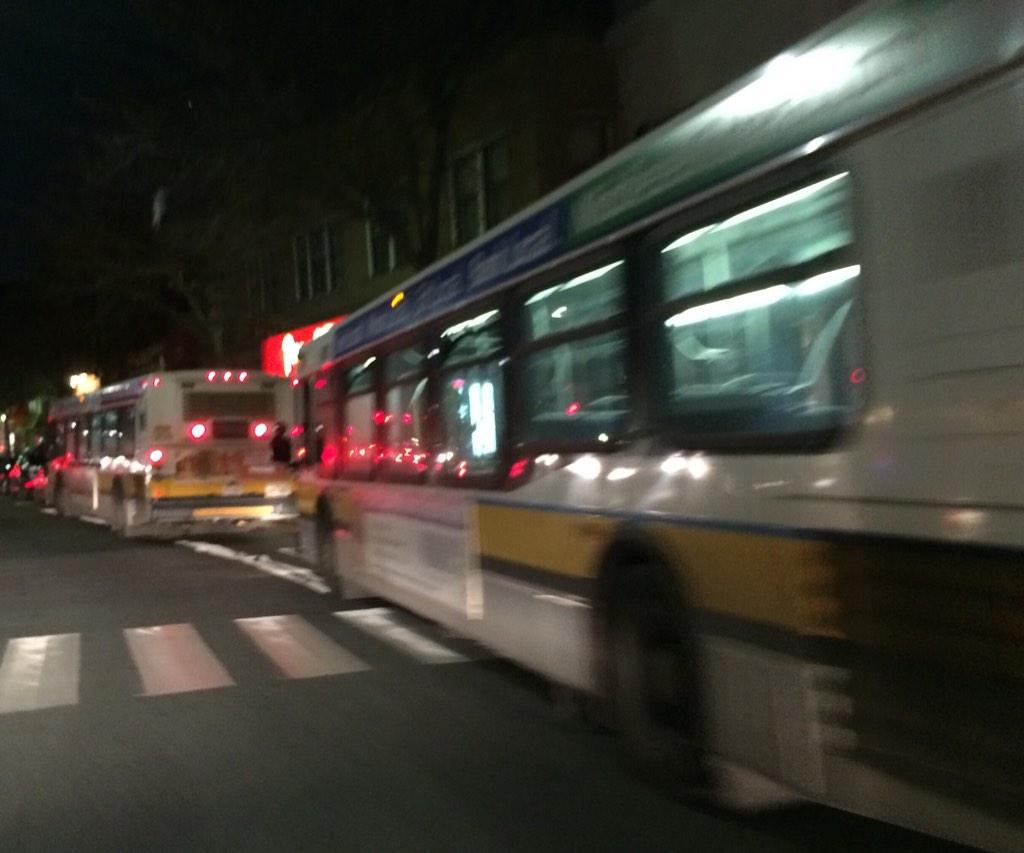 We have bunches of buses and bunches of people delayed by the unreliable service. The chronic unreliability of the buses encourage bigger bunches of folks to avoid the bunching buses, escaping 20+ minute waits at bus stops by driving up and down Mass. Ave.

There’s no excuse for this unreliable bus service.

The MBTA can fix this, and it is imperative that they act.  Unreliable buses are the weak link in the region’s transit system, and it doesn’t take too many 20 minute waits at a bus stop for people to give up on the T and drive instead.

This week’s little drama seems to be revolving around the appearance of the Community Preservation Act ballot question on the October 9 School Committee agenda, followed by the removal of the agenda item.

As the election approaches, the three school committee members who are not members of our Representative Town Meeting (Cindy Starks, Judson Pierce, and Kirsi Allison-Ampe) have declared their support for the Community Preservation Act. The YES website now lists six school committee members as supporters, while Mr. Hayner is the chair of the Vote No committee.

It’s no surprise that members of the school committee, who are well informed on town issues, have taken the time to study the issue and have stated public positions on the November ballot question.

When the preliminary agenda for the October 9 school committee meeting was released, Mr. Hayner (as chair of the school committee) called for presentations about the Community Preservation Act. Joe Curro was scheduled to make the presentation for the YES campaign, while Charlie Foskett was scheduled to make the presentation for the NO campaign. Both of these respected gentlemen have already debated the issue on the floor of Town Meeting (see Dan Dunn’s notes for Session 3, Article 22, of the 2014 annual town meeting), and their learned opinions weighed heavily on the individual decisions we made at that time.

The October 9 meeting already had a crowded agenda, and we were coming in a half-hour early for an executive session. Several of my colleagues and I told Mr. Hayner that we didn’t want the Community Preservation Act presentation added to an already packed agenda.

Arlington Town Counsel Douglas Heim wrote that “a School Committee vote to support or oppose adoption of the CPA is permitted, but is in substance an endorsement rather than a decision or policy within the Committee’s jurisdiction to carry out itself or request the Superintendent implement.” With the Community Preservation Act on the agenda, the committee could have taken a vote to endorse a YES or NO vote on the ballot question. Still, I don’t think it’s a very good idea. The task before the school committee is to make decisions about the future of the school system. not to opine about ballot questions where the policy decisions rest with the Board of Selectmen and Town Meeting.

If the school committee as a government body can, but probably shouldn’t, endorse a ballot question with no direct impact on the schools, then why conduct a debate in the middle of our meeting? A televised debate on the topic is a good idea, but it’s not the job of the school committee to stage it in the midst of our meeting. This is something best left to ACMi or the League of Women Voters, although the League has declared its support for adoption of the Community Preservation Act and urges a YES vote in November.

Which brings us back where we started when this little drama came to light. In stating the ground rules, Town Counsel wrote that: “a School Committee Member, like a Selectman or other elected Town official, may take a position on a ballot question as a school committee member in a variety of formats, including being listed as a supporter by a Ballot Question Committee. However, permit me to note that care should be exercised not to conflate a member’s support for the committee’s support as a body or to use any public resources in advocating a position on a ballot question.”

Charlie Foskett and Stephen Harrington also made a brief statement in the public participation section of the meeting, as is their right.

Even though it seemed to be a bit of a drama, everything worked the way it was supposed to work.

I am voting YES in November because I believe the small property tax surcharge will lead to spending that makes Arlington a more attractive community, a better place to live, and it will enhance my property values far beyond the cost of the surcharge. That’s why I voted to place the question on the ballot as a Town Meeting Member, and that’s why I will vote YES in November.